Shakespeare’s famous tale of betrayal, love, redemption and reconciliation is thought by many to have been his last solo effort and was brought recently and beautifully to life by Mark Campbell at Bexleyheath’s intimate Edward Alderton theatre.

The play’s action is set on a remote island where Prospero, the rightful Duke of Milan, plots to restore his daughter Miranda to her rightful place using both magic and clever manipulation. He conjures a storm to gather his usurping brother, Antonio, King Alonso of Naples and a collection of others on the island. There, he engineers the revelation of Antonio’s lowly nature, the redemption of the king and the marriage of Miranda to Alonso’s son, Ferdinand.

This production kept things simple, staying true to both a traditional interpretation of the play and the romantic genre into which it falls, yet incorporating several inventive twists and devices. The attractive, modern sparsity of the set with its wooden posts for trees and curved flats was offset with Campbell’s own sophisticated lighting design, complimented always by Michael Taylor’s inspired sound effects but most memorably in the opening scene to create the striking illusion of the tempest itself. The choice of ‘A Winged Victory for the Sullen’ for the show’s central musical theme worked fantastically well, providing a dreamy backdrop.

Richard Self’s Prospero was a delight from beginning to end, embodying every ounce of forgiving warmth and compassion that the character should, combining it with the requisite strange and eerie magic. Young Ciara O’Hare was an absolute revelation as Miranda, managing a perfect combination of wide-eyed innocence and innate wisdom beyond her years. Steve Padgham’s Trinculo and Matthew Friett’s Stephano made an excellent comic duo, with Friett’s timing and command of the language particularly impressive. The decision to cast both Ariel and Caliban as females was a brave one, but more enlightened in the case of Caliban, Prospero’s troubled, deformed slave, with Maureen Hardwen delivering a truly chilling performance and throwing an intriguing genderless light on the withered character. The tender removal of Prospero’s face paint on renunciation of his magic by Ariel (Louise Ody) created a particularly poignant feel to what was already an emotive conclusion. 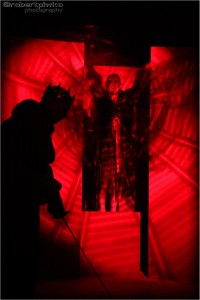 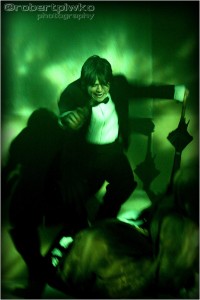 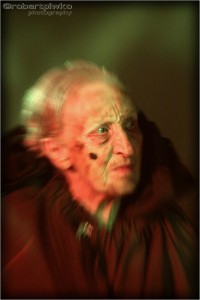 The credible and convincing staging of a Shakespeare work remains an enormous challenge for any company and is quite a rare undertaking for an amateur one, however this creative and memorable piece provided a perfect example of how it can be done well.

Photographs: Richard Self as Prospero, Louise Ody as Ariel, Maureen Hardwen as Caliban and Matthew Friett as Stephano reproduced with the kind permission of and (c) Robert Piwko (http://www.robertpiwko.com/).