I am fascinated with anything to do with Iceland. The Land of Fire and Ice is enigmatic and strange as it is breathtakingly beautiful with its stunning scenery and abundance of folklore. So it was with great expectation that I went along to the New Diorama to review The Rift Zone, a new piece by Night Light Theatre, a company that apparently exists “to bring imagination, creativity and beauty front and centre in the theatre.” The members of the company themselves recently visited Iceland in search of stories, so it sounded like the perfect mix. 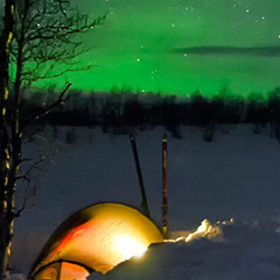 The first minutes of this production are indeed filled with promise. Great use is made of the theatre’s intimate space by Rhys Jarman, his set design comprising flickering light bulbs and planks of wood to create effects that are delightful and eerie in equal measure and which at times mirror the ethereal quality of the northern lights themselves. John Biddle’s unearthly folk score, performed live by members of the company throughout, is also excellent from the off and reaches an invigorating climax at the end of the piece, accompanied by some superb performances encompassing provocative movement to the music.

The problem is, there is just too much going on. The company has bravely and ambitiously tried to fit the spirit of Iceland, its history and all that it encompasses and stands for into 125 minutes, and unfortunately this just does not work. At the centre of the story are a young brother and sister, Olaf and Alfa, who are pulled into the Rift Zone, a kind of alternate reality which pre-empts the future. Alfa meets Bob, an American hydro engineer who woos her and wins a mining contract at the same time. Giants, trolls, Norse gods and Snorri, a bearded Icelandic historian and poet in his y-fronts, are also thrown into what is quite frankly a bit of a confusing hodgepodge.

The production sounds great and is aesthetically pleasing with some strong performances that overall capture the mystery and magic of a great country. It is clear that it has all been well thought through and passionately researched, the problem is that it is impossible to work out what is happening and why, most of the time. If an audience, for all of the fragments of enjoyment they may glean along the way, are struggling to see the overall point, then surely one of the main objects of live theatre, and something this company prides itself on doing well –storytelling – is largely defeated.