One glance at Katharine Heath’s delightful set which takes the shape of a shabby living room dressed in peeling wallpaper and littered with old hats, coats and all other manner of paraphernalia, and it is immediately clear that this latest Sherlock Holmes adaption is going to be fairly traditional. And indeed, rather than jump on a bandwagon that seems hell bent on depicting literature’s most famous detective and accompanying characters with a contemporary, progressive twist, Tacit Theatre’s production seems to stay true to its source material, depicting a “consulting detective” who, played perfectly by a soave Philip Benjamin, smacks of youthful brilliance, arrogance and swagger. 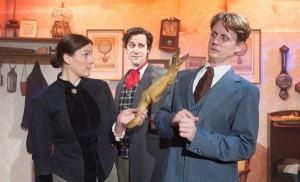 A Study in Scarlet is Arthur Conan Doyle’s first Holmes story and one of only four actual full-length novels about the detective. It documents his first meeting with Watson who, ravaged from war in Afghanistan, joins him in solving his first murder mystery.  By all accounts, this first novel is not the writer’s strongest and presents one of his most intricate and multi-layered plots, jumping back and forth from London to Utah in an attempt also to explain the motives of an avenging murderer. Probably not the easiest tale to adapt for stage, and things do get a little confusing and muddled at times, but the production rises well to its challenge with actors doubling up skillfully to play both the inhabitants of Baker Street and the distant Mormon settlement.

With all of this going on, Holmes and Watson take almost a back seat in the proceedings, but Lila Whelan and Greg Freeman’s enjoyable script gives them plenty of scope for interaction and they have a great chemistry and banter. Edward Cartwright’s Watson has a touch of the Philip Franks and a touch of the Hugh Laurie about him, and he brings a real warmth and excellent wit to the role. Actor-musicians are a welcome addition to any piece of theatre, and all of them handle their instruments with considerable panache, fully complimenting Annabelle Brown’s terrific original score.

A Study in Scarlet does what it says on the tin and what theatre should do, delivering a thoroughly enjoyable evening that has the audience giggling and guessing until the end.