Debris is Dennis Kelly’s first play and this revival for its tenth anniversary at Southwark Playhouse is OpenWorks Theatre’s debut production.

Painted grey and dominated by a large pile of rocks, the theatre’s ‘Little’ space, complemented by Signe Beckmann’s excellent, minimalist design, serves perfectly as the backdrop to this deliciously dark and often disturbingly comic piece. 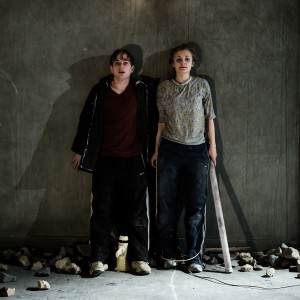 Performed in one act, the play comprises the alternating streams of consciousness of orphaned teenagers Michael and Michelle who, surrounded by the debris of their young lives, try to make sense of a strange, damaging and dysfunctional childhood and struggle to ascertain who they are and where they are from.

The narrative begins violently as Michael (Harry McEntyre) remembers the day of his 16th birthday when he came home to find his alcoholic, Jesus-obsessed father proceeding to commit suicide by crucifying himself in the front room. Michelle (Leila Mimmack) is fascinated with their mother’s death and goes on to give several conflicting, but always captivating, reports of how she died. And things never really let up; the entire 70 minutes comprises monologue after monologue revealing tale after disturbing tale.

Kelly has created a warped, chaotic and often dreamlike atmosphere designed to shock and confuse us into never quite knowing what is real and what isn’t. Under some highly imaginative direction from Abigail Graham, both actors impressively embrace their challenging roles, delivering long and often complicated speeches with just the right amount of weird, unsettling panache.

McEntyre is particularly compelling as he relates the story central to the narrative, that of him discovering a baby boy in some rubbish and deciding to take the child home to raise himself in the hope of giving him a ‘normal’ life. The irony and sadness are overwhelming and this is another absurd account which beggars belief, but McEntyre is poignantly mesmerising as he relates it.

Kelly’s world is disjointed, confusing and murky, and this piece is not for the faint hearted; but it won’t fail to entertain anyone who likes their theatre to challenge and provoke.