Best of Friends started life as The Golden Voice which, due to open last August at the Arts Theatre, disappeared in a cloud of controversy. Reworked, renamed and providing admirable testament to creator Nick Fogarty’s obvious refusal to give up, the piece has finally made it to the stage at the Landor. 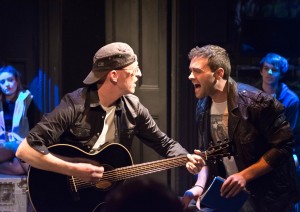 It all starts off quite well, with Mike Chariot (Aidan O’Neill) and Jim Ryan (Nick Fogarty takes a starring role as well as writing book, music and lyrics) rehearsing a song together backstage. Childhood friends who share a passion for music and song writing, they are striving to make their band a success. Everything goes to pot, though, when Chariot wins a tacky reality television show and, abandoning not only his friend and band, but his devoted girlfriend, disappears for 20 years to pursue a life of manufactured fame and cheesy, soulless pop. His return sees him transformed into something of a bitter music mogul wannabe, who attempts to reunite with his friend Jim (now resigned to a life of petty crime) and set up a nightclub designed to scout new talent. Throw a devoted ex and long lost son into the mix and this really should make for a great show.

However, whilst “Stars Falling” is probably the strongest number, and O’Neill’s singing voice is excellent, sadly it is all downhill from here. Whilst Fogarty is clearly a great musician and established song writer, unfortunately he is no actor and, considering they are supposed to be childhood buddies and now teenagers, he would have done far better to cast someone closer in age to the other male lead.  The rest of the music struggles to be remembered, there are aspects of the plot which are confusing and downright difficult to believe and some of the script is pretty cringe-inducing.

The sheer passion is unmistakable, however, and the cast are uniformly excellent, working superbly with what they have. Worthy of particular mention is Rosie Glossop, whose raw, soulful vocals smack with conviction throughout and, quite frankly, steal the show.

Reality television shows and their ability to damage lives is a hot topic at the moment, which should really make a great basis for a musical. However, as things stand, the material on offer here is simply not strong enough to do a promising idea justice.