Formed in 2012, Tree Folk Theatre prides itself on breathing new life into classic stories, filling them with inventive touches with the use of puppetry, masks and live music and song. The company’s first two works were derived from folk tales, but what better Shakespeare play for them to tackle and lend such innovation to than The Tempest, with its diverse collection of characters, multi-layered imagery and supernatural overtones.

Presented in the round, this production places emphasis on music and physicality from start to end, beginning and concluding the action with sequences which are presumably intended to depict the wedding of Alonso’s daughter to the King of Tunis or that of Miranda and Ferdinand, or both. James E. Anderson’s original score is intelligently crafted, contrasting airy ballads with crashing, dissonant chords to match the varying moods of the piece.  Lauren Cameron’s set design is simple yet effective and the cast make energetic use of the space throughout but particularly at the beginning when the entire area becomes the storm-battered boat. 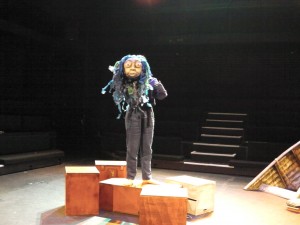 Tree Folk’s Prospero consists intriguingly of a large mask with an aged face and mass of seaweed tresses sported by Maia Kirkman-Richards who pulls off the dialogue and the paternal side of the character surprisingly convincingly. Other gender-bending touches include Amy Lawrence’s flighty, feathery Ariel and Ellen Butler’s impish, amusing Trinculo, with the same actress doubling up as Gonzalo. Worthy also of particular mention is Stuart Mortimer who creates a hilarious, belching Stephano, but the real show-stealer is Caliban, a puppet in four or five parts operated by several actors, the disjointed, fluid nature of which 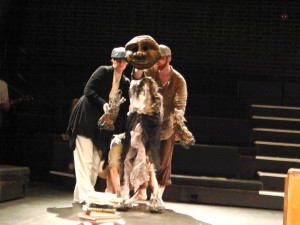 The renunciation of Prospero’s magic at the play’s conclusion consists not only of the removal of his gown but of the mask to fully expose the actress, and the gradual return of Maia Kirkman-Richards’ voice to its natural pitch in Prospero’s final soliloquy enhances further his submission to normality. This is not only a brilliantly original and creative touch on the part of director Alice Sillett, but testament to the skill of the actress because despite being a strange and unconventional deviation it seems a natural conclusion and serves perfectly to heighten the feelings of reconciliation and resolution.

This delightful production is a must-see for anyone who likes their Shakespeare with a twist and will appeal particularly to younger theatre-goers.

Photographs by Chris Jones: Maia Kirkman-Richards as Prospero and Jannik Archer as Caliban.