The Cutting of the Cloth @ Southwark Playhouse – March 2015

The Cutting of the Cloth, written in 1973, draws much from playwright Michael Hastings’ youthful experience as an apprentice tailor. It is such a fine piece of work that it is very difficult to believe it has lain in a drawer for over 40 years and is only just receiving its premiere. Two’s Company, under the direction of Tricia Thorns, has done a superb job of reviving this hidden piece and bringing it beautifully to life at London’s Southwark Playhouse.

Alex Marker’s impressive set design transports us to the Dover Street work-room of Kilgour, French and Sanbury, Savile Row in the 1950s. Run by the work hungry, seemingly unforgiving Spijak Wazki (Andy de la Tour) its fabric strewn floor and ever buzzing machinery help to create a sense of both relentless bustle and isolation from the outside world. Here we witness a fascinating microcosm of human life; Spijak and fellow tailor Eric vie for the best work and play out between them the still ongoing battle between tradition and modern advancement as hand-stitching is pitted against sewing on machines; young apprentice, Maurice, arrives to a torrent of bullying and intimidation from Spijack who is, as it turns out, really only trying to mould him into the best tailor he can possibly be; and seamstresses Sydie and Iris beaver away, looking on in compassion, at times adoration, in their efforts to keep the peace. 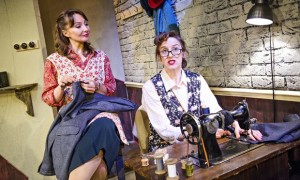 Not a great deal happens really, but the power of the production lies is in this very human set of characters, their lives and their sensitive portrayals by all concerned. The script is well-constructed and often hilarious with some great one-liners, usually delivered drily and with impeccable timing by Abigail Thaw’s Iris. The audience is reduced to laughter whenever she opens her mouth but she also shows a more tender side when her feelings are hurt by Eric; she harbours a fierce crush on him but his interests appear to lie elsewhere. Paul Rider gives a beautifully understated performance of this complex character whose raw emotions only really surface when he laments the death of his sister, Spijack’s wife, from alleged overwork.

Andy de la Tour’s Spijak’s Polish accent is so good it is at first a little difficult to make out, but he complements Rider’s Eric wonderfully. James El-Sharawy is perfect as Maurice, taking the character on its journey from shy, cowering boy to confident, budding tailor who can hold his own and stand up for himself, with ease. Contempt turns to affection as Maurice begins to adopt some of his teacher’s ways and the two actors handle this change in pace and interaction really well.

This is a moving, intelligent production of a hidden gem which runs at Southwark Playhouse until 4 April.

Photo – Alexis Caley as Sydie and Abigail Thaw as Iris.