The House of Mirrors & Hearts by Eamonn O’Dwyer and Rob Gilbert is intriguingly billed as “a haunting new chamber musical about love, lies and the ghosts of our pasts.”  Having started life on the Edinburgh fringe, a re-worked version of the show now finds a temporary new home at Dalston’s intimate Arcola Theatre which provides the perfect space and atmosphere for what is an intense and claustrophobic piece from beginning to end. 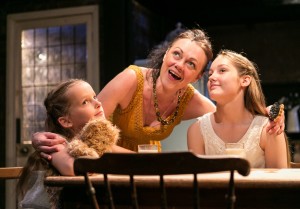 To begin with, we are presented with a happily family home with young, contented, ballerina daughter, Lily, (Charlotte Pourret Wythe), and apparently happy and fulfilled mother, Anna, (Gillian Kirkpatrick), relaxing together in the kitchen. It is when husband and father, David, (Graham Bickley), meets a mysterious and bloody death in his mirror workshop, seemingly at the hands of older daughter, Laura, that misery and chaos understandably ensue. Mirrors are smashed and the old cliché of seven years of bad luck propels us forward into a new reality which sees Anna attempting to lose her problems in bottles of red wine and Bloody Marys, a withdrawn and tortured Laura seeking solace in her bedroom and Lily parading about like a teenaged advert for Soho’s red light district. Cue gentle, geeky, academic Nathan (Jamie Muscato) who comes to rent one of the rooms in the house. He is devoting his life to the study of an obscure poet and as his dusty old books dominate the kitchen table his frequent, “relevant” quotations from the works become a little too cheesy for comfort.

The remainder of the action attempts to unravel the mystery of the death and builds on the theme of breakage, both literally and metaphorically, as Lily and Anna’s characters erode before our eyes and more glass is smashed. Lily’s violently clumsy attempted seduction of Nathan (and anything male that moves, by all accounts) and Anna’s growing neurosis and frequent odes to alcohol complement each other well and both actresses deliver towering performances. In fact, the vocals are excellent across the board and, combined with an accomplished trio of musicians, do justice to O’Dwyer’s provocative, multi-layered score. Kirkpatrick and Bickley are both in particularly fine voice. 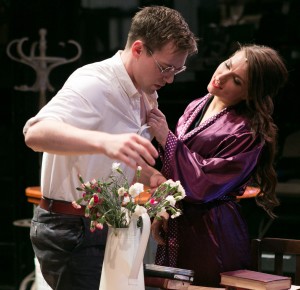 Inevitably, it is the quiet, mysterious one that Nathan is drawn to and this relationship develops subtlety before our eyes before reaching an explosive climax by a shiny lake as they mime the smashing of numerous bottles in a tremendous release of pent up energy and pain which is no doubt intended to be a metaphor for all kinds of other things too.

The plot is verging on the ridiculous, it is full of clichés and the hint at child abuse is so subtle that I missed it. However, this is a charming, characterful and intriguing piece of theatre which definitely deserves to be seen.

The Cutting of the Cloth @ Southwark Playhouse – March 2015